In our article “Industrial monitoring and control systems: Big data industry 4.0” we defined what industrial big data is, we analysed its characteristics and we explained the classic and modern patterns of industrial data usage. Thanks to this, we were able to create a scheme that illustrates the monitoring system’s interaction, whose ultimate goal is achieving industrial automation.

In this entry, we will study the relationship between industrial automation and the systems described in the previous article. Therefore, we will define this term, we will describe its utilisation and we will analyse its components and how they work. As a result, we will be able to outline the process of industrial automation, which will help to highlight the benefits of automation for the transformation of traditional businesses into industries 4.0.

In order to talk about industrial automation, however, we must start by explaining its relationship with the subject we dealt with in our previous post: big data in Industry 4.0.

We mentioned, with respect to this, that the obtainment and processing of big data was what made it possible for Industry 4.0 to integrate all traditional industrial assets into an intelligent system that allow for their global and combined management. Nevertheless, we also insisted this entails the monitoring and analysis of this information, the reason being that the optimisation and automation of production processes is unfeasible without this last step. This is the direction towards which the advances in data science & big data analytics are heading.

Data science, according to this perspective, is the one that aims to profit from the analysis of industrial big data. This requires that data scientists develop and implement statistical methods, machine learning systems and information visualisation tools.

On the other hand, big data analytics is one of the possible applications of data science. The analyst’s mission is to identify patterns in the information provided by the various data sources available to the company in order to justify decision-making. 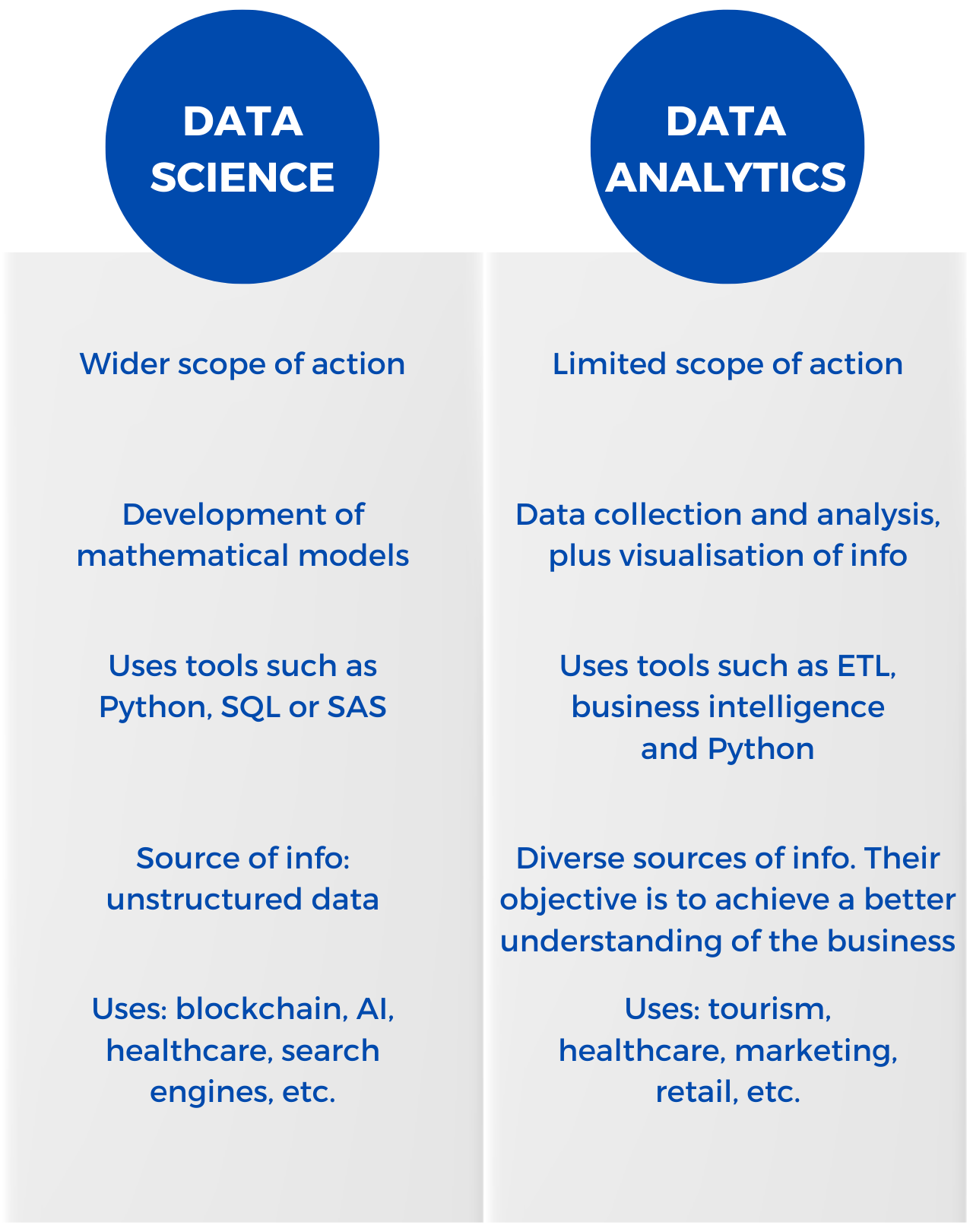 Consequently, the difference between data science and big data analytics is that the former has a much broader and theoretical scope, while the latter is an applied discipline whose aim is to improve the organisation’s operational capacity through the ideation of big data–based solutions.

As can be seen, both disciplines use big data and the Internet of Things (Iot) to achieve their respective goals, so they usually appear in the same articles and websites, which results in some confusion as to their nature. For this reason, we present this comparison (big data vs IoT) to help eliminate any doubts.

By using this information, we can understand that we should not use a formula like “big data vs iot” because these are not mutually exclusive terms, but rather two different, but interconnected, realities.

Having established the difference between data science & big data analytics and having compared big data vs iot, we can now talk about industrial automation and its benefits. At the end of this document, we will also build a diagram showing the relationship between automation and monitoring in order to clarify how Industry 4.0 works.

As mentioned, big data does not offer any competitive advantage if it is not processed to obtain detailed information about the elements involved in the production and, in the same way, this analysis does not imply any progress unless the business acts upon this data.

This concept is extremely vague and, in fact, it can also be applied to the automated extraction of information. Therefore, in this article we will define industrial automation as the supervision, control and use of electromechanical, electro-hydraulic, computerised and electro-pneumatic equipment to carry out relatively repetitive tasks automatically.

These tasks or processes can be part of any of the company’s areas of activity, thus establishing 3 hierarchical levels of industrial automation.

Notwithstanding, we would like to remind you that each company has its own characteristics and that, as a result, the solution adopted must be custom-designed and implemented attending to the business’ particularities. Consequently, not all industrial organisations apply the same automation systems, which enables us to differentiate the following types. 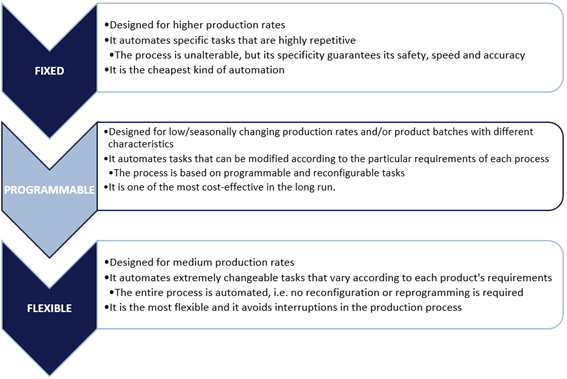 At the beginning of this article we stated that automation is an indispensable step to guarantee the competitiveness of the industrial fabric; in spite of this, all this information would not be complete if we did not offer a brief description of the difficulties that any company will face when undertaking this transformation. In fact, if they are not taken into account, the adoption plan is much more likely to fail or, at the very least, to fall short of its objectives.

This is why, in the first instance, Digital Transformation Departments need to raise awareness among the company’s executives of the fact that the implementation of industrial automation systems is a long-term and costly project. Whether they choose to design a new infrastructure or to renovate the existing one, the initial investment in material, financial and human resources will be substantial. Moreover, it will not be profitable in a short period of time and its benefits must be measured using parameters that go beyond the financial aspect.

Consequently, the chosen strategy must consider a wider range of aspects. Efficient automation is much more than planning initiatives and installing sensors and automatons, as the whole organisation must be involved in its adoption. Thus, a competitive strategy, in addition to being based on a comprehensive analysis, must be followed by a change of mindset.

Finally, other elements such as prejudices and socio-labour problems should be taken into account. In other posts we have already pointed out how difficult it can be to convince a company’s board to incorporate the latest technological advances into their industrial activity. In the industrial automation tools’ case, not only will we encounter this reluctance, but we must also bear in mind that they will not be perceived positively by the workforce either, as their usage will derive in the loss of hundreds of thousands of jobs. Thus, it is essential that the industrial fabric, together with public administrations, face this change of paradigm from a social perspective and by making use of continuing education.

In spite of all these problems and reticence, the truth is that industrial automation has evolved uninterruptedly over the centuries and, thanks to its technological advance, its application in any company is no longer a futuristic prospect, but a palpable reality. Among these technological tools we could pinpoint:

Proper planning, consensus and the selection of the right technological tools are key in order to make the most of the benefits of industrial automation.

Specifically, its most valued benefits are the following.

Now that we have explained its functioning and mentioned some of its benefits, we offer you this diagram, which describes how these systems interact. 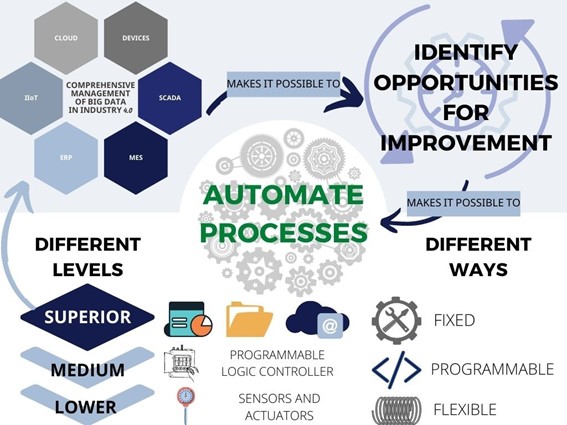