In “Smart energy building and building automation” we explained what building automation is, why it will be increasingly implemented in our buildings and the benefits it offers. In this post we will give you more information about which devices are the most commonly used, the applicability of this technology in the transformation of a factory into a smart building (called, in this case, smart factory), and we will offer some hints about why it is crucial that the industrial sector be part of this transformation.

What is a smart factory?

As we have already pinpointed in several of our posts, the functioning of Industry 4.0 is based on the ability to create a network. This consists of the human and material resources that are part of the different production levels and its purpose is to manage a business globally thanks to the employment of IoT, industrial big data and automation.

Cyber-physical systems (CPS) help us to achieve this goal. These are physical objects that take advantage of communicative, collaborative, physical and computational processes to create their own virtual representation in cyberspace. By working in coordination, this digital model can monitor and control the physical part, while the latter sends data to feed the virtual representation in real time.

According to the essay “Smart Factory Systems” (published in Informatik Spektrum), the effective and combined utilisation of CPS and other Industry 4.0 systems turn a factory into a smart factory.

Consequently, it is possible to state that it is not feasible to achieve the maximum level of interconnection between the components of the production process without the contribution of smart factory IoT. This is because it facilitates the gathering and processing of big data obtained through sensors to generate that integration of the physical and virtual worlds.

As we have mentioned in several of our articles, the analysis of this data through intelligent algorithms provides with considerable knowledge of the industrial plant, which allows its devices and processes to be optimised (by improving its efficiency, agility, and adaptability). In particular, the installation of smart machines (those that obtain real-time data from their components) lead to a greater self-awareness and self-comparison.

Self-awareness refers to the ability of smart machines to self-assess their performance and self-diagnose faults that may be causing a decrease in efficiency. This property is essential to be able to carry out a predictive kind of maintenance.

Self-comparison, on the other hand, is based on the usage of smart factory IoT to share and compare information on the operation of similar machines in order to change their settings.

This ensures that the production line is adaptable enough as to meet the specific requirements for each item while maintaining the desired quality.

How to implement a smart factory system?

Turning a traditional industry into a smart factory, notwithstanding, is not just about applying smart factory IoT and installing smart machines. Industrial activity is a complex reality, so it is necessary to plan which aspects are to be optimised, know what resources (material and human) will be devoted to each of them and predict the challenges that the company will face when this transformation be put into motion.

Essential technology for a smart factory

Firstly, let’s review which are the most common smart factory systems to turn a factory into a smart factory.

We now know which technological tools could help us face the transition towards a smart factory. However, this transformation is not only about using the right tools, but also about analysing their implementation and creating a plan that suit the needs of each organisation.

Consequently, the first step is to identify the company’s opportunities for improvement in order to set SMART targets. If this first step is avoided, it is still possible to optimise the factory’s operation, but it is very likely that it will fall short of the executive’s aspirations and that many resources will be wasted.

Secondly, an interdisciplinary team must be created to lead the transformation process. As we have been repeating in our last posts, it is not possible to make progress in the modernisation of a company if it is not accompanied by a change of mindset (both on the part of the workforce and on the executive’s).

Subsequently, we must resort to the smart factory systems that adapt to the established goals. We will now provide a diagram illustrating the levels of implementation of CPS and some of the attributes that can be included in each of them. 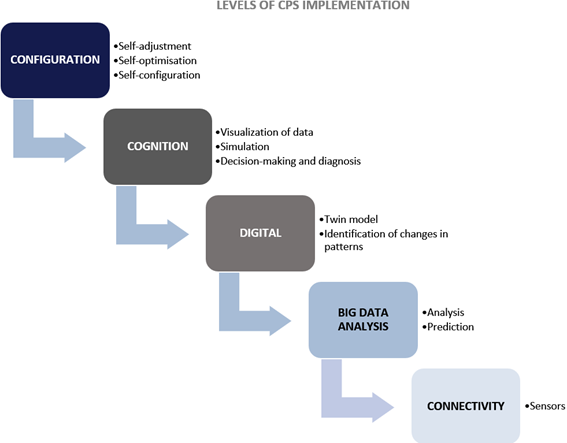 Finally, the results must be assessed and, in accordance with these, changes and improvements that contribute to the achievement of the selected targets are proposed. In other words, the process starts again to ensure that the plan is always in line with the factory’s current situation.

Benefits of industrial automation for a smart factory

Throughout this article we have already mentioned and explained the vast majority of these benefits: flexibility, resource optimisation, detailed knowledge of the production process, etc. Nevertheless, it should be kept in mind that industry and construction are two of the main pillars of European climate action, so, sooner or later, all factories will have to start their journey towards Industry 4.0 and become involved in the fight against climate change.

In fact, the European Commission has proposed that as of 2030 all new buildings should be emission-free and that all new public buildings be zero-emission already from 2027. Consequently, they will be obliged to consume as little energy as possible, they will not be allowed to emit carbon derived from the utilisation of fossil fuels, they will have to use renewable energies and they will have to indicate in their Energy Efficiency Certificate what their contribution to global warming is according to their expected life cycle emissions. Furthermore, those that be among the 15% worst performing buildings in each country will be obligatorily renovated to achieve, as a minimum, an F certificate.

Likewise, the National Buildings Renovation Plans will be fully integrated into each country’s National Energy and Climate Plans, so that they will have to provide their strategy to stop resorting to fossil fuels in air conditioning and heating systems by 2040. In addition, this proposal suggests allowing countries to ban all usages of fossil fuels in buildings. Finally, it also encourages owners and public bodies to adopt industrial automation tools and ICT to boost the building’s efficiency and safety.

Therefore, the industrial sector’s future in the next decade will imply the combination of business activity with a strong environmental commitment. If we want to achieve this, the best thing to do, apart from applying the systems we have described in this article, is to follow these ISO standards.